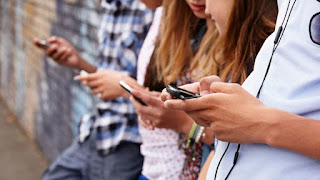 A: I didn't sleep well last night. I was on my phone until well past midnight.

B: Again? This is the third time this week you've stayed up on your phone all night. You might want to cut back on your screen time.

A: The thing is, I've already spent much less time on my phone that I used to. I don't think screen has such an impact on my sleep.

B: Actually, not just your sleep, but your general happiness.

A: Oh really? I never thought much about it, to be honest.

B: Yeah, I've recently watched a TED talk named Why Our Screens Make Us Less Happy. I recommend it for anyone wanting to know what screens are doing to us and what to do about it.

B: Yeah, the speaker showed that people spend way more time on apps that make them unhappy, such as apps for social networking and entertainment.

A: That's exactly what I spend most time on. The problem is once I start using them, I just don't seem to be able to stop.

B: That's another thing the speaker mentioned - the fact that unlike magazines, books, or newspapers which eventually end, those apps rob us of such stopping cues.

A: That makes so much sense. That's why I can just keep on scrolling the news feed instead of putting the phone done and move on to something else.

B: Exactly, it's bottomless. But you know what? It's never too late to change.

A: Where do I start to go offline then?

B: Well, the speaker suggested that you start with putting your phone away while having dinner or put it on flight mode when you start your morning.

B: It might be tough in the beginning, as you'll probably experience withdrawal the same way on would from a drug. But you'll get used to it eventually.

A: It's definitely worth a try! I've already wasted so much time on the screens. It's time for me to take back control!

B: That's right. There things in life that deserve more attention that your phone. Like personal connections, our hobbies, or the beauty around us. Trust me, once you're able to put the phone aside, you'll fell much happier and enriched that you were ever before.